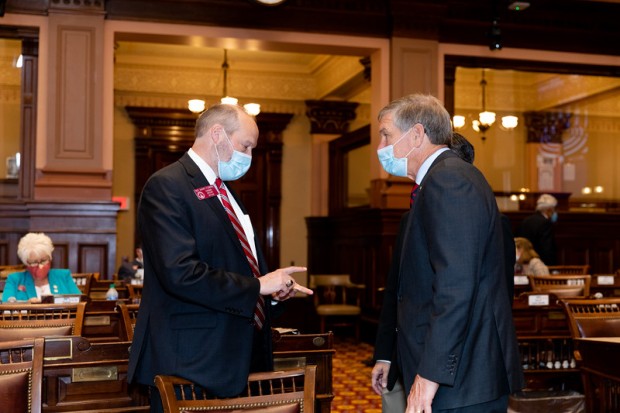 On Monday, June 15, the Georgia General Assembly returned to the State Capitol to resume the 2020 legislative session. We had suspended indefinitely on March 13 due to the growing threat of the coronavirus, COVID-19. During this unprecedented time, Speaker David Ralston appointed a bipartisan House committee to develop a series of recommendations on how to conduct the remaining 11 legislative days of the session safely. When we returned to the Gold Dome this week, we picked up where we left off, committees got back to work, and we voted on legislation in the House chamber six days this week.

The threat of COVID-19 has reshaped how we conduct our legislative business in many ways, but it has not stopped the House from serving Georgians across our state. The House held its first virtual committee hearings while the session was suspended, which allowed us to continue discussing important issues. Before we returned this week, additional safety guidelines were implemented, including measures to promote social distancing to enable us to meet in-person once again.

One of the most important topics of discussion during the remainder of the session is the Fiscal Year 2021 (FY 2021) budget, which begins July 1, 2020. Our state experienced a drop in tax revenue as a result of COVID-19, which includes a projected loss of more than $1 billion in April and $178 million in May compared to 2019. As a result, the House and Senate Appropriations committees held several virtual hearings to discuss how the revenue loss will impact the FY 2021 budget. This week, the Senate passed its version of the FY 2021 budget, and a conference committee was appointed to work out the differences between the House and Senate versions of the budget.

The House passed Senate Bill 249, which enhanced the retirement benefits in the Peace Officers’ Annuity and Benefit Fund of Georgia for the first time at no cost to taxpayers. Additionally, it allows for the inclusion of jail officers to be eligible to participate. I am very thankful for our hardworking law enforcement community, and I was proud to vote yes on these enhanced benefits for them, without putting a burden on taxpayers.

Several important bills related to health care were passed by the House this week, including Senate Bill 303, which prevents surprise billing.  SB303 would require each insurer, except health maintenance organizations, to provide the following information to the public through interactive mechanisms on its website: comparisons of payment amounts accepted by in-network providers for health care services; an estimate of the average price received by in-network providers for the health care services; an estimate of the out-of-pocket costs that a person would owe his or her provider for a health care service; and comparison of quality metrics applicable to in-network providers for major diagnostic categories.  House Bill 888 was sent to the governor, and it will protect patients from unexpected medical bills if they unknowingly receive treatment by out-of-network doctors in emergencies.

Other health-related bills passed this week include:

Many other House bills also passed in the Senate this week, some of which were immediately transmitted to the governor for his signature. Our Senate counterparts passed House Bill 849, which is one of three legislative measures proposed by Gov. Kemp to combat human trafficking in Georgia. When enacted into law, it imposes a lifetime commercial driver’s license ban in Georgia for those convicted of a human trafficking crime. The Senate also gave final passage to House Bill 820, a recommendation of the Georgia Commission on Freight and Logistics, to establish the Department of Transportation’s Georgia Freight Railroad Program to enhance the state’s investment in our freight rail system.

Other legislation of local interest passed this week includes:

We are now in our final few days of the session on our way to Legislative Day 40, or Sine Die, on Friday, June 26. With only a hand full of days left in the legislative session, I encourage you to reach out to me about legislation important to you. Please call me the Capitol office at (404) 656-5024 or by email at bruce.williamson@house.ga.gov.  As always, thank you for allowing me to serve as your representative.